Are we there yet? Slow progress on the journey towards women’s health and human rights revealed

The Convention on the Elimination of Discrimination Against Women (CEDAW) Map identifies the areas in which governments across the region are failing to act, including collecting data on the drivers of violence against women, developing gender-equal laws and improving access to health care for underserved women.

Lead author Dr Janani Shanthosh said that while gender equality is a global goal shared universally, there was a lack of guidance on how to achieve it and where we’re falling short.

“The crisis of sexual assault occurring nationally – and allegedly within our political institutions – signals that much more needs to be done to address the drivers of gender inequality,” she said.

The Convention, considered an international bill of rights for women, was introduced by the UN General Assembly in 1979 and was universally ratified. When countries ratify, they are signing up to change their laws and constitution to uphold women’s rights, including health related rights.

Countries also agree to actively introduce initiatives and policies that reduce health inequities as they relate to women. This can include collecting data on drivers of violence against women or improving access to health services for underserved women.

“We saw that countries at all economic levels were able to achieve similar levels of implementation, but interestingly, those where health, safety, or wellbeing are under threat due to crisis were actually making more progress,” said Dr Shanthosh.

The Asia-Pacific region is home to 60 percent of the world’s population and two billion women and girls and in 2019, 30 percent of countries in the region were experiencing an ongoing humanitarian crisis. However, the report showed that these countries had fully implemented 40 percent compared to 34 percent in countries not experiencing a crisis.

“This tells us it’s very possible to implement international human rights obligations in low resource settings and to progressively work towards human rights implementation in a range of different circumstances,” Dr Shanthosh added.

“While it’s a positive step that Australia has amended the Family Law Act to expand the definition of domestic violence to include economic abuse, physical assault and emotional manipulation, we still have a long way to go.”

Dr Shanthosh said the Map was a tool that women’s rights advocates can use to hold governments to account, particularly where government action is inadequate, poorly funded or unacceptable to the affected women.

“The fact that over 60 percent of UN recommendations were not implemented tells us that rather than looking for new solutions, so much can be accomplished by countries adhering to their human rights obligations – doing what the UN Committee has asked them to do,” she said.

Natasha Stott Despoja AO, Member, UN Committee on the Elimination of Discrimination Against Women; Chair, Our Watch said that the pandemic had made existing inequalities for women and girls, as well as discrimination of other marginalised groups, such as people with disabilities and those in extreme poverty, worse.

“It risks impeding the realisation of human rights for women and girls,” she said.

“It has also created a financially constrained environment, but also one in which researchers and policymakers can make a meaningful change and create a new opportunity for our community locally and globally.

“The CEDAW Implementation Map is an example of a human rights voice that signifies the need for change.”

Dr Shanthosh said the report findings showed little attention was being paid to women’s leadership and participation, benchmarks and timelines for action were rarely used, and there was limited focus on women experiencing multiple forms of discrimination (e.g. due to living rurally, in poverty and belonging to an ethnic minority).

“A multi-sectoral and multi-pronged approach is needed – legislation, as well as awareness campaigns, health systems strengthening, access to access, data collection and supporting women’s leadership – these are all areas where the CEDAW Implementation map provides guidance,” she said.

“This tells us it’s very possible to implement international human rights obligations in low resource settings and to progressively work towards human rights implementation in a range of different circumstances,” Dr Janani Shanthosh 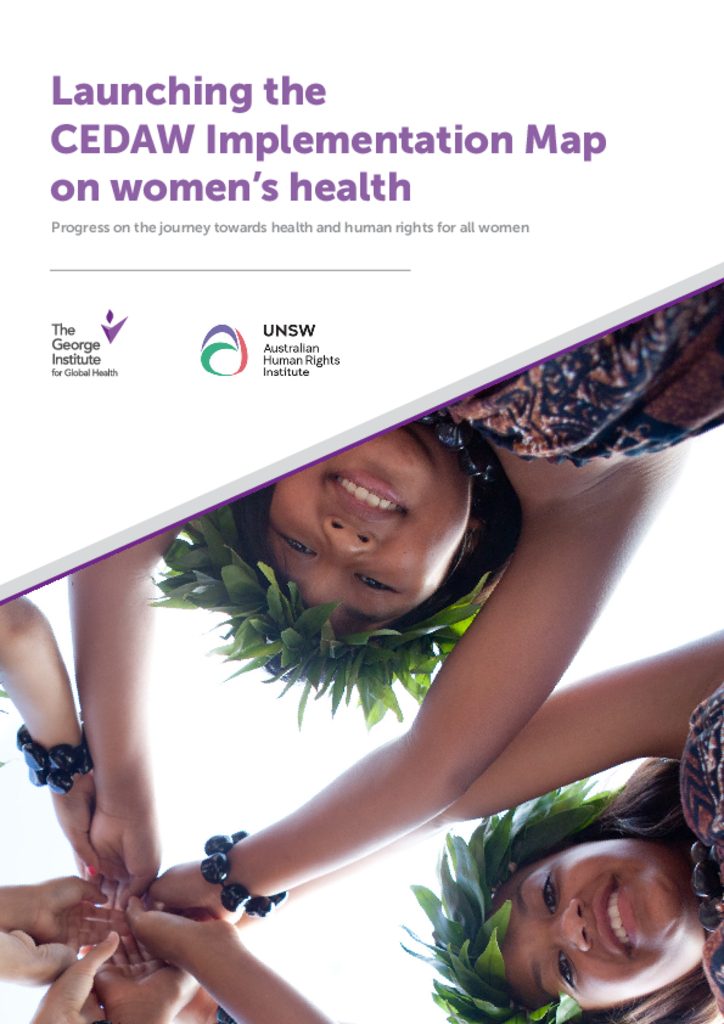